In 1995 Cathy organized a WALK FOR PEACE at the Civic Arena to raise awareness and money for the plight of the Bosnian orphans. She knew she needed some high-powered help and obeyed an inner urge to solicit the help of National Hockey League Super Star, Jaromir Jagr, a native of the Czech Republic. She sent him a letter and four color pictures taken at the refugee camp. “I knew in my heart he was the one to help!” she said. Within a few weeks Jagr responded saying he would join in her efforts to help the orphans of Bosnia.

On September 17, 1995 Jagr hosted the first WALK FOR PEACE. September of 1997 marked the third walk. The 1997 fundraiser was the most successful effort thus far, and their efforts had begun to make an impact on the Pittsburgh community. After three years of what seemed to be an uphill battle, Cathy was feeling quite optimistic about future events. As a result, she was planning additional fundraisers.

Unfortunately, that winter, Cathy was diagnosed with non-Hodgkin’s Lymphoma, a form of cancer. Her work was brought to a sudden halt. At home one evening during radiation therapy she heard the story of a child suffering from the same illness who would be spending the holiday in the hospital. Feeling the same heartache she did years earlier in Bosnia, Cathy knew she must reach out to this child and others suffering in the Pittsburgh area. The result was the birth of the Mother’s Hope Foundation which aids suffering children at home and abroad. The foundation is run out of Cathy’s home. Her work continued with three more WALKS FOR CHILDREN, now benefiting both children in Western Pennsylvania and Bosnia and Herzegovina. 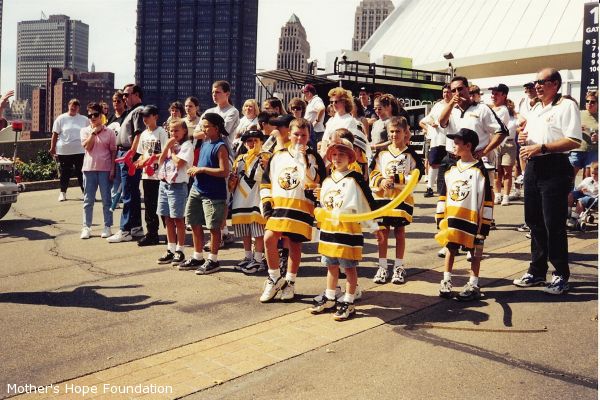 The Love Behind Mother's Hope

In June of 1994 Cathy Howe, a homemaker living in the South Hills of Pittsburgh, Pennsylvania traveled to Medjugorje, Bosnia-Hercegovina following the passing of her mother. While there she visited the Capljina refugee camp in Tasovcici. She was part of a humanitarian group which was greeted by children and adults left homeless by the Bosnian War. These refugees were sleeping in boxcars without electricity and only newspapers covering their windows. Some had war wounds. Awestruck by their plight, Howe began handing candy bars to the young children. “I was totally numb,” she remembers. “I felt as if I was in a dream and the refugees I saw were the lucky ones.” Three days later she arrived in Pittsburgh with a huge hole in her heart for all the suffering people, especially the children. “When I came back and saw my own children, I thanked God like I had never thanked him before,” Cathy recalls.

In February of 2001, Mother’s Hope Foundation held its Inaugural Night of Hope, a Rainbow and Roses Benefit Evening. This annual fundraising dinner was the cornerstone of the foundation’s effort to fulfill its mission for many years. The evening gave supporters an opportunity to mingle with well-known Pittsburghers, bid on special one-of-a-kind items, and support this deserving cause. 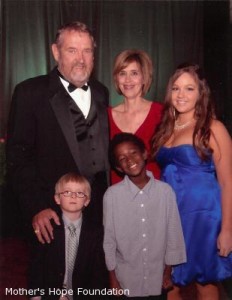 With the generous support of the Pittsburgh business community Mother’s Hope Foundation held 12 Annual Nights of Hope which supported the foundation by having a black-tie dinner accompanied by silent and live auctions in downtown Pittsburgh.  In 2008, Dennis J. Sipe became the first ever Eternal Hope Award Recipient at Mother’s Hope Foundation’s Night of Hope. Through his generosity as an annual Circle of Hope Sponsor, Mother’s Hope greatly increased its efforts to bless children in Western Pennsylvania and abroad.

Honorary Chairmen and Advisory Board